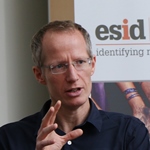 Sam Hickey is Professor of Politics and Development at the University of Manchester, and Joint Director of Research at the ESID research centre. He is also Research Director at the Global Development Institute, where ESID is based.

Sam’s research interests include the links between politics and development, including issues of state capacity and elite commitment; natural resource governance; social exclusion and adverse incorporation; citizenship participation and NGOs; the politics of social protection and social justice.
Within ESID, Sam is coordinating and researching on a project that will investigate the implications of oil for governance and inclusive development in Ghana and Uganda. He is also working on a project exploring the politics of securing higher levels of capacity and commitment to delivering improved quality schooling, through a comparison of Bangladesh and Ghana. Finally, he is providing support for a project on women’s political empowerment exploring the link between women’s political inclusion in developing countries and the successful adoption and implementation of policies aimed at gender equity.

Hickey, S., Bukenya, B. and Matsiko, H. (2021). ‘Pockets of effectiveness, political settlements and technopols in Uganda: From state-building to regime survival‘. ESID Working Paper No. 172. Manchester.

S. King and S. Hickey (2015). ‘Beyond elite bargains: building democarcy from below in Uganda‘, ESID Working Paper No. 45. Manchester.

A.-G. Abdulai and S. Hickey (2014). ‘Rethinking the politics of development in Africa? How the “political settlement” shapes resource allocation in Ghana‘, ESID Working Paper No. 38. Manchester.

S. Hickey, K. Sen and B. Bukenya (eds.) (2014). The Politics of Inclusive Development: Interrogating the Evidence. Oxford: Oxford University Press.
F. Golooba-Mutebi and S. Hickey (2013). ‘Investigating the links between political settlements and inclusive development in Uganda: towards a research agenda’, ESID Working Paper No. 20. Manchester.
S. Hickey (2013). ‘Thinking about the politics of inclusive development: towards a relational approach‘, ESID Working Paper No. 1. Manchester.