Home What's the future of Zambia's political economy following the firing of the governor?

What's the future of Zambia's political economy following the firing of the governor?

1 September 2020
Caesar Cheelo and Marja Hinfelaar reflect on Zambia’s dramatic news.
Zambia’s central bank, the Bank of Zambia (BOZ), is widely regarded as one of the most professional economic institutions in the country, successful in fulfilling its primary mandate of maintaining price and financial system stability.
Since 2018, we have been researching the effectiveness of BOZ in delivering on its mandate, exploring some of the main factors behind the sustained success of the central bank as effective relative to other apex economic institutions in Zambia. BOZ’s steadiness is especially striking when compared to other economic institutions, like the Ministry of Finance and Zambia Revenue Authority, whose functioning was notably undermined by the ruling coalition.
Our research shows that BOZ’s effective performance relies significantly on legal autonomy, which insulates the institutions from undue interference. Effective performance also relies on the role of the Bank’s governor. So what does it mean for Zambia’s political economy that governor Denny Kalyalya has just been fired? 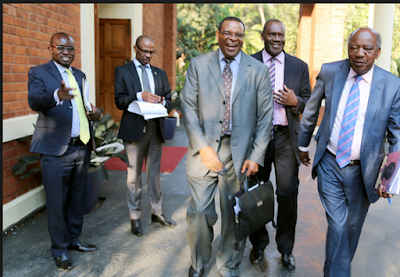 In our timely new paper, out soon, we investigate the role of the governor in fostering and sustaining the success of BOZ. We note that occasional political pressures on the central bank arose quite often between the mid-1990s and 2019, emanating from the competitive clientelist democracy, especially around elections. During those episodes of external political pressure, BOZ was generally able to deliver on its mandate and was identified as a ‘pocket of effectiveness’. We view a pocket of effectiveness as a ‘… public organisation that is relatively effective in providing the public goods and services the organisation is officially mandated to provide, despite operating in an environment in which effective public [policy and] service delivery is not the norm.’ The prospects for an institution to emerge as a pocket of effectiveness are shaped by organisational factors, namely the scope and clarity of its mandate; the strength and political linkages of its leadership; and its internal culture and cohesiveness.
Zambia’s political settlement is based on highly centralised executive powers, which has resulted in the importance of the personality and quality of the leader and their chosen coalition. At times, this has produced a positive outcome, as we saw during the Mwanawasa years in the 2000s, but can also produce unproductive ones, in which the function and capabilities of institutions are undermined. The Zambian Central Bank’s relatively independent position in the ever changing political coalitions from the mid-1990s to 2019 was attributed to the conscious efforts of its top echelon, particularly the governor, to entrench BOZ’s autonomous position and work towards legislative independence in 2016. Besides changes in the legislative framework, BOZ’s countervailing powers as a counterpart to the state were strengthened by the acknowledgement by political leaders that the central bank acts as an important ‘signaller’ to international financial markets.
Historically, the BOZ governor has played an important role in defending BOZ’s mandate, with the ability to withstand political pressures and prevail over the Executive regarding the necessity for BOZ to abide by international and regional central banking standards. From the 1990s, BOZ maintained a long tradition of internal mentoring and grooming of would-be future governors and senior management. However, BOZ’s autonomy and effectiveness were briefly under threat during December 2011–January 2015. This period coincided with a major political and ideological shift, which saw a shortlived attempt by the ruling party to change conventional central banking policies.
Dr Grieve Chelwa, a senior lecturer at the University of Cape Town, noted that:

There was a general sense of armageddon in the dark days of late 2015 and early 2016 and the heroic efforts by Dr Kalyalya and his team brought the country back from the brink. Knowing that the origination of the crisis was in the Ministry of Finance, Dr Kalyalya has openly castigated government on their reckless and uncoordinated borrowing and spending policies, showing unusual independence of thought by a public servant in Zambia

The recent firing of the governor may well be a turning point for BOZ’s independence and, possibly, for its effectiveness as well.
Three key challenges will be:
Firstly, there appears to have been a glaring lack of due process in taking the decision to fire Kalyalya. The reported lack of internal consultations in the Executive before making the change is very disquieting, particularly considering the critical point in the country’s economic trajectory. State House takes, or should take, its cue on the macroeconomic growth and stabilisation swings of the economy and required countercyclical monetary, fiscal and external policy from the heads of the Executive’s apex economic institutions.
Secondly, the firing of a governor with credentials aplenty, extensive accolades and a long track record of monetary policy success during a precarious economic period was always bound to have a strong social and political backlash, locally and internationally. The negative reactions have possibly been significantly worsened by the fact that no reasons were given, for the firing of the governor, creating space for speculation. Meanwhile, according to the law, the recently fired governor will continue to receive his full contractual package, salary and all, until May 2023, when his contract would have ended. This essentially means BOZ will pay for two governors, while deriving the services of only one. This is clearly an unnecessary cost, resulting from a rushed and irrational decision.
Finally, the appointment of a possibly politically inclined and motivated individual as BOZ governor has the potential to undermine the independence, credibility and, particularly, effectiveness of the central bank. The risks of further capital flight from Zambia have just escalated. And, given the hasty nature of movements at BOZ, in the interim, the governor position will remain vacant as it is a legal requirement that the new appointee cannot take up office, pending ratification by the parliament after it reopens on 11 September.
Typically, one might have argued for that the new governor should be given the benefit of the doubt. However, Zambia is facing a unique quadruple threat, namely: a general slump in real GDP growth, even before Covid-19 hit; headwinds from a full-blown Covid-19 pandemic; a huge and problematic pre-Covid-19 debt overhang, with massive debt service pay-out demands; and pressure of escalating fiscal slippages – including money printing by BOZ – during the 2021 elections just around the corner.
Experimentation during a macroeconomic crisis is never a good idea, least of all when the economy already had a tried and tested winning formula for macroeconomic and financial stabilisation. But since the decision has already been taken and is unlikely to be reversed. we can only hope the new governor will learn quickly and will withstand the competitive clientelist political pressures that have so often come to bear on BOZ around election time.