The politics and governance of basic education – drilling into the details 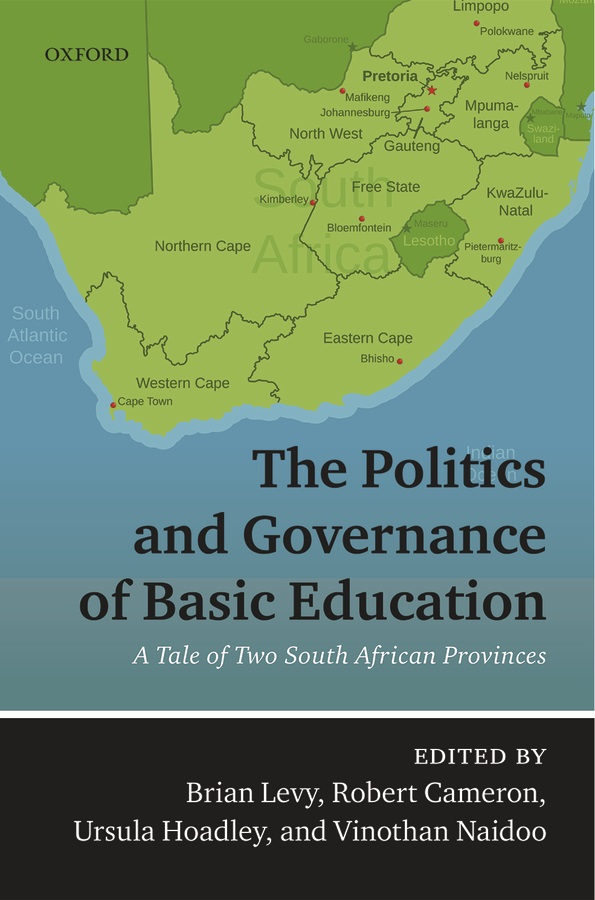 18 September 2018
Lead editor of new open access book on how politics influences learning outcomes in South Africa, Brian Levy gives an overview of the book and its key findings.

The view that ‘context matters’,  that development practice needs to move from ‘best practice’ to ‘good fit’, has become commonplace among development practitioners and scholars.  What are the practical implications of this general nostrum?
One way to address this question is to focus on a specific sector, and to explore how specific policy and institutional challenges within that sector play out across divergent locales. My new book (co-authored/edited with colleagues from the University of Cape Town),  The Politics and Governance of Basic Education: A Tale of Two South African Provinces,  published this month by Oxford University Press, and available here (by agreement with OUP) for free download – details the results of a multi-level, multi-disciplinary and multi-methodology analysis along these lines.  In this blog post (the first in a series), I lay out my personal take as to what are the major findings and implications of the research.

At national level (as chapter 3 of the book details), political and institutional drivers account for the disconnect between South Africa’s bold aspirations to introduce performance management into the education system and the non-binding ‘isomorphic mimicry’-like system which eventually was put into place. At provincial level, chapters 4-7 detail some stark differences  between the Western and Eastern Cape educational bureaucracies in the quality of management – and the roots of these differences in the starkly divergent background political contexts of the two provinces.  Unsurprisingly,  a well-functioning bureaucracy emerges as a valuable asset: the Western Cape does well (but the Eastern Cape poorly) the core bureaucratic tasks of  managing resources,  assigning personnel to where they are most needed, monitoring and managing on the basis of performance. However:

A 2007 assessment of Grade 6 mathematics capabilities conducted by the Southern African Consortium for Monitoring Education Quality (SACMEQ) found that while the Western Cape was the highest scorer among South Africa’s provinces, it was outperformed by Kenya, which achieved its superior results with only one-fourth the level of resources per learner. Careful econometric analysis (in chapter 6 of the book) confirmed that these results were achieved  even after controlling for a variety of other influences (including socio-economic circumstances of learners, teacher skills and experience, and parental participation at the school level).
Case studies of four Western Cape schools (in chapter 8 of the book) reveal how,  for all of its strengths, the Western Cape Education Department has the classic bureaucratic limitation of a limited ability to ‘see’ at hyper-local levels – leaving (in the absence of support for school-level participatory approaches) the terrain vulnerable for capture by predatory local interests. Kenya’s strength, by contrast, is in the ‘softer’ side of governance  – a shared  motivation among stakeholders throughout the system  to achieve good learning outcomes. Chapter 10 of the book (and an upcoming blog post) explore how this ‘softer side’ emerged in Kenya, and how it influences learning outcomes.

The Eastern Cape school-level case studies in chapter 9  detail how proactive engagement on the part of school governing bodies and parents helped sustain and  turn around performance in at least some schools.  This finding is supported by the econometric analysis in chapter 6  which shows a strong, significant positive effect on educational outcomes of  ‘parental contribution to building construction and maintenance’ (high in the Eastern Cape relative to the Western Cape). But participation is no panacea; the school-level case studies also uncover instances of  capture by predatory interests.

As the 2018 World Development Report, Learning to Realize Education’s Promise, put it, many education sectors are “stuck in low-learning traps in which each acts in ways which maintain the status quo – even if society, and many of these actors, would be better off if they could shift to a higher-quality equilibrium”. The Millennium Development Goal of ‘education for all’, of getting children into schools,  was one which aligned well with a top-down, process-compliance-oriented view of public service provision. But this approach is insufficient to achieve major gains in learning outcomes.  Key to ‘unsticking’ a complex system trapped in a low-level equilibrium is a transformative idea, one capable of reframing the  visions of the full gamut of stakeholders as to how they should engage.  What is called for is a vision of pro-active engagement – a vision, one might say, not simply of ‘education for all’, but of ‘all for education’.
This post is also published on Brian’s blog here
Follow Brian on twitter @brianlevy387