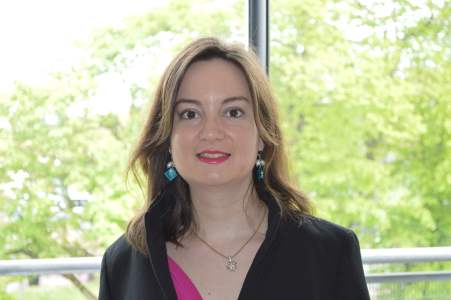 2 February 2017
Eleni Sifaki recently joined ESID as a Research Associate and is currently focusing on our women’s empowerment research. Here she tells us more about her life and work.

What were you doing before joining ESID?
Before joining ESID I completed my PhD in Development Policy and Management at the Global Development Institute, The University of Manchester. My PhD investigated the gender implications of commercial transitions in global production networks, focussing on the table grapes export sector in Crete, Greece. After my PhD I became a Fellow at the Gender Institute, LSE, where I taught a course on ‘Gender, Globalisation and Development’.
What is the current focus of your work?
Since returning to Manchester I am working with Prof Sam Hickey and Dr Sohela Nazneen on the Gender and Political Settlements project at ESID. The project explores the politics of gender-inclusive development. Specifically, it investigates the forms of politics that lead to gender equity policy adoption and implementation, focussing on two policy domains: domestic violence legislation and girls’ basic education.
What are the main findings of ESID’s gender research?
One of the main findings coming from the gender project is that political commitment to gender equity is shaped by a variety of factors related to both the type of a country’s political settlement and policy domain-related variables. Dominant party settlements tend to have quicker policy adoption than competitive clientelist settlements, because there is less opposition from resisting groups; but they must be accompanied by a strong ideological commitment from the ruling coalition for implementation to be strong. Political settlement factors co-exist in affecting political commitment with factors such as presence of a strong women’s movement, legacy of women’s political inclusion and the influence of transnational norms. It was found that policies are implemented the furthest when they are aligned with the interests of the ruling coalition and, when this is not the case, a strong policy coalition on the issue is required.

At ESID we are committed to inclusive development – that is, development that benefits everyone, including the most marginalised, such as women and the poor. This must be the goal for all countries.

Tell us about the findings of the gender research in Uganda
ESID research in Uganda found that the policy on universal primary education was quickly adopted without any significant resistance, as girls’ education had already become an accepted policy issue, and did not address sensitive issues around marriage and the family.
In contrast, domestic violence legislation was adopted after a long process of negotiation between the policy coalition and the government. The women’s movement built a successful coalition with political elites through re-framing the issue of domestic violence as threatening to family life. The coalition was able to gain the support of the president, which was however conditional on the Bill ruling out more fundamental challenges to gender relations with regards to the issue of marital rape. The result was a watered-down Domestic Violence Act, which did not incorporate more controversial issues, thus having more ameliorative, rather than transformative, effects for gender equity in practice.
Why is it important to look at the gendered politics of development?
ESID’s gender research has shown that the politics of development are not gender-neutral. Rather, governments tend to respond to the demands of groups that are closely associated with the interests of the ruling coalition.
In clientelist settings, women’s issues do not generate enough rents to establish a strong political commitment. Hence, the policy coalition on gender equity needs to be wide and strong. In Bangladesh, for example, the domestic violence coalition forged links with political elites through a female Minister and was able to push for policy change.
The cross-country research has also shown that the history of women’s political inclusion is critical in understanding women’s claims-making and political influence today. For example, research in Rwanda showed that the legacy of genocide led to a strong ideological commitment by the government post-conflict to incorporate women into politics, opening up space for gender equity issues to be on the table.
So looking at the ways in which politics of development are gendered is essential in order to understand how and under what circumstances governments successfully introduce policies that promote gender equity.
What development issues are you most passionate about?
I am passionate about achieving gender equality and women’s empowerment in developing countries, and eliminating all forms of gender-based violence. I am also passionate about ending all forms of inequalities and discrimination, including on grounds of race and sexual orientation, as different forms of inequalities intersect to marginalise people in different ways. I am also committed to promoting labour rights and decent working conditions for all.
What do you enjoy most about working at ESID?
I really enjoy working with an interdisciplinary team of people with a wide expertise and experience of conducting research in a range of countries. ESID is a fascinating centre, hosting a number of different projects which are diverse yet unified under the common theme of exploring the politics of inclusive development.
If you could change one thing about how development happens, what would it be?
Governments often prioritise economic development at the expense of social development, and when this happens, it contributes to increased poverty and inequality. The two have to be equally important and reinforce each other through an integrated development plan. At ESID we are committed to inclusive development – that is, development that benefits everyone, including the most marginalised, such as women and the poor. This must be the goal for all countries.
Who is your development hero?
My development hero is Nadia Murad, the Yezidi genocide survivor and human rights activist who spoke up for the rights of Yezidi people, women and refugees. She is an amazing and inspiring person who turned her personal horrific story into a powerful inspiration to respect and protect the human rights of all people, including women and children.
What do you do when you’re not busy with research?
In my free time I enjoy reading classical literary works from around the world. My favourite writers include Ernest Hemingway, Federico Garcia Lorca and William Golding. I also love to explore music from across the world and discover new artists of local folk music. Last but certainly not least, I greatly enjoy dancing and I am a big fan of Zumba.
Eleni is working on our Gender and the Political Settlement project. Find out more.