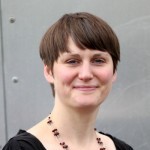 Sophie King is Research Fellow at the Realising Just Cities programme at the University of Sheffield’s Urban Institute.
Along with Diana Mitlin and Peter Kasaija, she has co-produced research for ESID into urban poverty reduction programming in Uganda in partnership with the National Slum Dwellers Federation of Uganda and their support NGO, ACTogether Uganda.

Sophie’s research, and former practice, focuses on relationships between marginalised communities and local governments, most recently in relation to urban social movements. Her articles have been published in the Journal of Development Studies; the European Journal of Development Research; and Third World Quarterly. Her current work focuses on research as transformative practice and ‘seeing’ the inner city ‘from the South’.