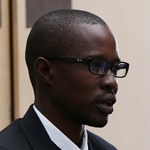 Our Ugandan researcher and journalist, Angelo Izama, on the tensions leading up to the elections in Uganda

The streets of the capital city, Kampala, have emptied. At the offices of an independent news magazine, the managers are pondering. A day before the election the office is deserted. This is expected, but since Uganda had a public holiday the previous day, one manager said, more people were working then than had showed up today. “This place was full on the public holiday, but the election tomorrow has scared off colleagues.”
The 2016 presidential and general elections are the most tense in recent memory. To sum it up, it’s not that President Yoweri Museveni, in charge for 30 years, is running again or that his main challenger, Dr. Kizza Besigye is running against him again, for the fourth time. City dwellers, who are stocking up on food supplies, filling up their tanks and planning for the worst, are afraid that the past several months may have shaken up the President’s appeal. It’s true large crowds have flocked to his challenger’s rallies, and indeed his. But it is Dr. Kiiza Besigye who is the comeback kid and suddenly after weeks of campaigning – as one journalist put it – he looks like the “national flag bearer”, it’s his election to lose.
Thus the most common people  – like the car washer on the hill below State House Nakasero, last abandoned by a sitting president in 1985 – are fearful the election may be so close that both sides will resort to violence. The government will send in armed men and the opposition could paralyse the city and countryside with mass protest. Either way, it’s bad.
This is the worst vision of what could happen after polling day. It’s been aided by months of rather peaceful campaigning by all sides. The most peaceful, ironically, in recent memory also and explains why this election, unlike any other, sits at the threshold of change, of one sort or the other.
Uganda has never had a peaceful transfer of power in its history. It is one of a handful of African countries that typecast the continent as an unstable estate of power hungry despots with no serious agenda beyond large parades and castles of vanity filled with relatives, pimps and serial killers. There was Idi Amin in the 1970s, Milton Obote thereafter, and lately Joseph Kony of the Lords Resistance Army. The last rebel leader never took power, but the greater part of 20 years under Yoweri Museveni signified the change of tune in the 1990s of leaders like him, who sought to stabilise their countries, subdue rebel movements and, while semi-authoritarian, restart the conversation about the return of peaceful civilian rule.
Alas, however, elections under regimes stabilised by revolutionary armies from Ethiopia to Rwanda and successively in Uganda have not been considered competitive. Add to this the removal of term limits and the spread of corruption and patronage, and the years have passed with the same faces on the ballot – without the prospect of political reform.
It is this military to civilian transition, not election every five years, that lurks like a demon from the past in the fears of those leaving the city for the village. The question on their minds is whether the results of a competitive election would be respected – and, if not, will the parties resolve this the old-fashioned way, by shedding blood?
This may explain why, despite leading in every single poll, the president and his men appear panicked ahead of the poll. It’s a national dilemma, how to conduct a peaceful handover if it is required when the final tally is announced, on the one hand, and also how to convince the opposition supporters that this time around, President Yoweri Museveni has won the election fair and square, without having to do so by clobbering and shooting them on the street. There are no easy answers.
In fact, it may instead show not the limitations of the country’s leaders, but rather of the political system. A military to civilian transition requires more than an election. It depends on reforming the political system itself and providing for things like separation of a professional army from politics. Elections alone won’t do.
Read Angelo’s latest working paper on the governance of oil in Uganda and Ghana
Visit Angelo’s website