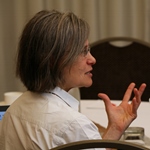 By Professor Diana Mitlin, who leads the ESID project on urban poverty in India.

This research project is a unique collaboration between an action-research NGO, the Society for the Promotion of Area Resource Centres, a former Indian Administrative Service officer, an Indian academic and myself at the University of Manchester.

We have been examining the Basic Services for the Urban Poor (BSUP), a Sub-Mission of the Jawaharlal Nehru National Urban Renewal Mission (JNNURM). BSUP was originally meant to be about access to universal services, but became about building housing. There are three main types of development:

1) Existing housing is scrapped and occupants are (in theory) offered relocation in medium-rise dwellings.
2) Existing housing is taken out, a greenfield site is created and medium-rise dwellings are constructed.
3) The settlement is maintained and improved through upgrading in-situ. Occupants benefit from an investment in their dwellings and there is improved access to better services. Internationally, this is the model that is recognised to be good practice.

One example where the BSUP is working well is in Pune, a prosperous city close to Mumbai with a growing infrastructure in slum areas and a strong level of self-government. Historical legacy matters in Pune – and is evident both in terms of economic strength and quality of administration. Wealthier states tend to do better. In contrast, Patna, the state capital of Bihar in the East has seen very limited results for the BSUP. It’s a deprived city, where not even the middle class have access to services. Patna was opportunistic in acquiring BSUP resources and overambitious about the numbers of houses to build. Just 480 households have accessed medium-rise dwellings – and residents are frustrated with the poor quality of construction.

Another city, Visakhapatnam, has been successful in constructing over 23,000 dwellings in medium-rise blocks. Devolution is widely considered to be the driver of capacity development and, like Pune, Visakhapatnam benefits from having a devolved self- government that looks after its own affairs. But there are concerns about the quality of some developments; when settlements are built on the periphery there are difficulties with the cost of transport and accessing employment. Inhabitants are also paying 50% of the cost of development. Visakhapatnam’s corporation has organisational capacity and has delivered units, but it lacks relationship capacity and has failed to draw in municipal departments and civil society agencies that could improve the quality of designs. In contrast, the critical factor for Pune’s success in pro-poor programming is the ability of the corporation’s leadership to engage with civil society. That’s what makes a difference. In the first phase of Pune’s BSUP programme, houses were built on the periphery of the city and they weren’t occupied. But the programme began to work when they went into a coalition with civil society organisations. Over 5,000 in-situ units have been completed to date. Pune is a success story of co-production.

More specifically, the research shows that for quality housing you need a specialist cadre of urban specialists in the civil service and a flow of information, learning and knowledge between senior staff and people in civil society organisations with real experience on the ground. It is vital for implementing agencies to draw local communities into a dialogue, listen to their needs and respond accordingly. In-situ upgrading requires an engagement with local beneficiary households.

Moving forward, the kind of relationships that we found in Pune need to be institutionalised in many other Indian cities. But the experience in Bhubaneswar suggests that even where such collaboration is ad hoc, it can make a difference. In Bhubaneswar, 1,300 families are benefiting from improved homes. Although a relatively small-scale development, this has achieved success as organised communities have been partnered by NGOs able to implement an in-situ development.

The case of BSUP in India clearly shows that when a visionary city or state bureaucratic leader, who is committed to change, aligns with civil society groups then pro-poor change happens.