Book Review: The Politics of Inclusive Development: Interrogating the Evidence 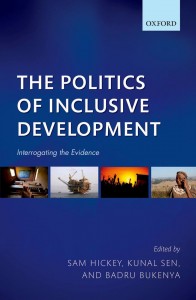 Dr Brendan Halloran
27 February 2017
I recently reviewed The Politics of Inclusive Development for The Journal of Development Studies. I thought it was a really compelling set of conceptual and empirical explorations, and I highly recommend it. This is a slightly amended version of the Journal review.
*
It’s become an increasingly common refrain in development aid circles that ‘politics matters’. As chronicled by Carothers and de Gramont (2013), the journey from a purely technocratic to a more political understanding of development, and of the role of foreign aid, has been a slow and incomplete one. Nevertheless, it is now becoming widely accepted that there are important political dimensions of development, and indeed that development is itself an inherently political process. Thus, the important question is no longer whether politics matters for development and poverty reduction, but rather how, and what the implications are for development actors of various kinds. Unfortunately, our broader understanding that politics plays an important role has outpaced research unpacking the nature of political dynamics that would support more inclusive patterns of development.
Thus, the edited volume by Hickey, Sen and Bukenya, The Politics of Inclusive Development: Interrogating the Evidence, is both timely and relevant. The book’s various contributions take us beyond the maxim ‘politics matters’ to much more specific and nuanced conceptual and empirical description of what exactly is meant by politics and how it shapes inclusive development, both positively and negatively. The volume brings together important thinking about the role of institutions, and state capacity more generally, and the political settlements that underpin them, while also pointing to the importance of ideas and norms as further drivers of inclusion. Furthermore, throughout each chapter, covering diverse topics from natural resources governance to gender inclusion, the authors consistently emphasise the importance of agency, of elites but also non-elite actors, especially poor and marginalised groups. Thus, in their exploration of the political dynamics of inclusive development, the volume finds a balance between structure and agency. Recognising, on the one hand, structural factors like initial conditions (including the legacy of colonialism), the distribution of power in society, and the nature of elite settlements, but also appreciating the role of individual and collective actors in terms of forming new developmental coalitions, disseminating influential ideas about development, and navigating the micropolitics of service delivery.

“The book [takes] us beyond the maxim ‘politics matters’ to much more specific and nuanced conceptual and empirical description of what exactly is meant by politics and how it shapes inclusive development.”

As interest in the politics of development has grown, some authors have focused on the barrier the political factors can play (e.g. Devaraja and Khemani, 2016). Conversely, Hickey et al. see political dynamics and development processes as inextricably intertwined, with both positive and negative implications for the prospects of inclusive development. Politics, in their view, and following scholars such as Acemoglu and Robinson (2012), shapes institutions that in turn influence the nature of development outcomes. Thus, a fuller understanding of the role of politics must examine the deeper power structures and coalitions, the political settlement, that often shape institutions and their behaviour. The volume does explore the path dependency of both political settlements and the institutions of governance, but also highlights the potential for shifts towards more inclusive outcomes. New actors and groups can arise, electoral incentives for governing elites to provide public goods can increase, and marginalised groups can mobilise collectively to press for recognition and inclusion. External actors and international dynamics may also play an important role as they intersect with national and local contextual factors. Indeed, it is this more balanced approach to structure and agency that distinguishes this book from much of the literature on political settlements, in which the emphasis has more often been on describing those settlements rather than on understanding how they might shift or interact with other political, social or economic forces of change.

“It is this more balanced approach to structure and agency that distinguishes this book from much of the literature on political settlements, in which the emphasis has more often been on describing those settlements.”

That said, if this book has a weakness, it is that it is a summary of the existing evidence on the politics of inclusive development. This evidence base is partial, and thus most chapters are indeed much stronger on exploring the various political dimensions that determine development patterns and outcomes than in providing concrete insights about to how to move in the direction of inclusiveness. For example, Mosley’s chapter on progressive taxation and public expenditure notes that conflict or crisis has pushed governing elites in some countries towards more inclusive positions and others not, but that we aren’t sure why. The contributing authors make consistent mention of the need for coalitions, the possibilities of mobilising poor and marginalised groups, and the importance of ideas and norms, but given the book’s broad sweep across numerous dimensions of development, few chapters go into much depth about how these positive factors actually come about or influence outcomes. This gap reflects the lack of research on shifting politics for inclusive development, one in which the volume’s contributors are helping to fill through their association with the Effective States for Inclusive Development Research Centre, for which this book represents an initial academic output.

The Politics of Inclusive Development is an important book for development researchers and practitioners, as well as progressive social justice reformers of various stripes. Indeed, despite limitations in the evidence base that this volume is drawing on, the authors consistently provide insights relevant to those seeking to make change happen across multiple development issues. Each chapter provides a grounded assessment of the relevant factors that present obstacles to inclusive developmental progress, as well as emphasising a consistent message about the opportunities for catalysing change through new ideas, broad coalitions, seizing windows of opportunity, and the mobilisation and engagement of poor and marginalised groups. Thus, this book should be a foundational text for academics, policy makers, front line implementers and community organisers, indeed anyone with an interest in how we can progress towards a more inclusive and prosperous shared future.
This blog was originally published on Brendan’s personal site.
References:
Acemoglu, D. and J. Robinson (2012). Why Nations Fail: The Origins of Power, Prosperity and Poverty. London, Profile Books.
Carothers, T. and D. De Gramont (2013). Development Aid Confronts Politics: The Almost Revolution. Washington, D.C., Carnegie Endowment for International Peace.
Devarajan, S. and S. Khemani (2016). If Politics Is the Problem, How Can External Actors Be Part of the Solution? Washington, D.C., World Bank.