Home "Agaciro" the Kinyarwanda word for dignity. Ideas of self-reliance in Rwanda

"Agaciro" the Kinyarwanda word for dignity. Ideas of self-reliance in Rwanda 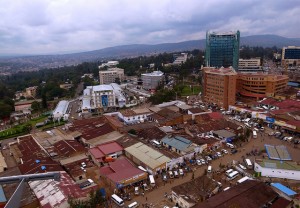 20 November 2015
By Anna Webster
At ESID we’re interested in the role of ideas in shaping development. To understand which ideas are salient in particular countries, it helps if you are close to the ground. Our researcher Frederick Golooba-Mutebi spends half his time in Rwanda and believes that one big idea there is self-reliance.
“Rwandans want to free themselves from anything that feels like domination,” he argues. “We’re not saying we can do without external assistance, but we don’t want to be imposed upon and dictated to in return for help.”
Paul Kagame – below –  is reported to be a proponent of this idea. He has called on Rwandans to have a mindset of self-reliance and aim for social and economic independence, instead of relying on other countries. The idea of self-reliance also seems to be associated with the idea of dignity. Kagame is reported to have said that Rwandans deserve dignity and without it they wouldn’t have overcome the challenges facing the country. “There is a Kinyarwanda word, ‘agaciro’, that means dignity and it’s a word that’s used fairly regularly both in and out of government in Rwanda,” says Golooba-Mutebi. “There is no dignity in being dependent on outsiders and the poor want to think of themselves as a dignified poor.”
So what has shaped these ideas of self-reliance and dignity? Golooba Mutebi believes that the refugee experience of some of Rwanda’s ruling elite is key. Some of the elites, along with their parents, were forced out of Rwanda from the late 1950s to the 70s because of their politicial beliefs or their ethnicity. Others were born in exile and grew up as refugees. As refugees they were treated as second class citizens, being denied opportunities for things such as education.
There was also the feeling that the world had not treated their plight with the attention it deserved and that after they had been forced out of the country, they were ignored. “That is what pushed them to find their own solution to their predicament” says Golooba-Mutebi. “They tried to negotiate their return to Rwanda and when that failed, they decided to go back by force of arms. That culminated in the genocide against the Tutsi which added further to the sense of grievance. Not only had they been ignored as refugees, but when they tried to go back to Rwanda the world allowed the genocide to happen.” Golooba-Mutebi  (left) believes that this legacy has created the mentality amongst Rwandans that at the end of the day they are on their own. They feel the world owes them nothing, so they must find a way of developing Rwanda that allows them to live on their own terms. Golooba-Mutebi also believes that these ideas shape development. “Rwandans realise that they will never be able to attain the autonomy they crave if they don’t pull the country out of poverty and develop it to reach a stage where they can pay their way.
“Dignity derives from doing things for yourself and how do you get to the position of doing things for yourself? You get there by having a strong economy, a healthy population and an educated population. So self-reliance is the central idea driving a great deal of things that Rwandans are aspiring to do. The things that will enable them to live like dignified people.”