Home What is political settlements analysis?

What is political settlements analysis?

ESID experts Tim Kelsall and Sam Hickey provide a clear and essential guide to political settlements analysis. What is it and why should you be interested?

The graphics in this piece were developed by Tim Kelsall for ODI.

A political settlement is a tacit agreement among powerful groups about the rules of the political and economic game, that keeps the peace by providing opportunities for those groups to secure a distribution of benefits (such as resources, rights, and status) they find acceptable.

But the precise nature of the political settlement can have profound consequences for what it’s possible to do in terms of development and who benefits as a result.

Understanding the political settlement should thus be a priority for anyone who wants to improve the lives of poor people.

In this blog, we explain political settlements analysis using a model developed at ESID, and present a few ‘how to’s to consider when it comes to applying this research.

What are the basics of political settlements analysis?

Building on the work of Mushtaq Khan, Brian Levy and others, ESID’s new model categorises countries’ political settlements according to two dimensions. First is the ‘social foundation’, which captures the demography of power. Second is the ‘power configuration’, which captures power’s geometry.

In all societies there are powerful groups, whether based on gender, class, ethnicity, religion, or some other identity. Some of these groups, acting alone or in concert with others, have the power to make, break, or shape the basic rules of the political and economic game. Governing elites can respond to these groups in two basic ways: co-optation, or repression. Groups who are co-opted receive benefits and are settlement ‘insiders’. Groups that are repressed or marginalised are ‘outsiders’, forced to acquiesce or not strong enough to overturn the settlement. 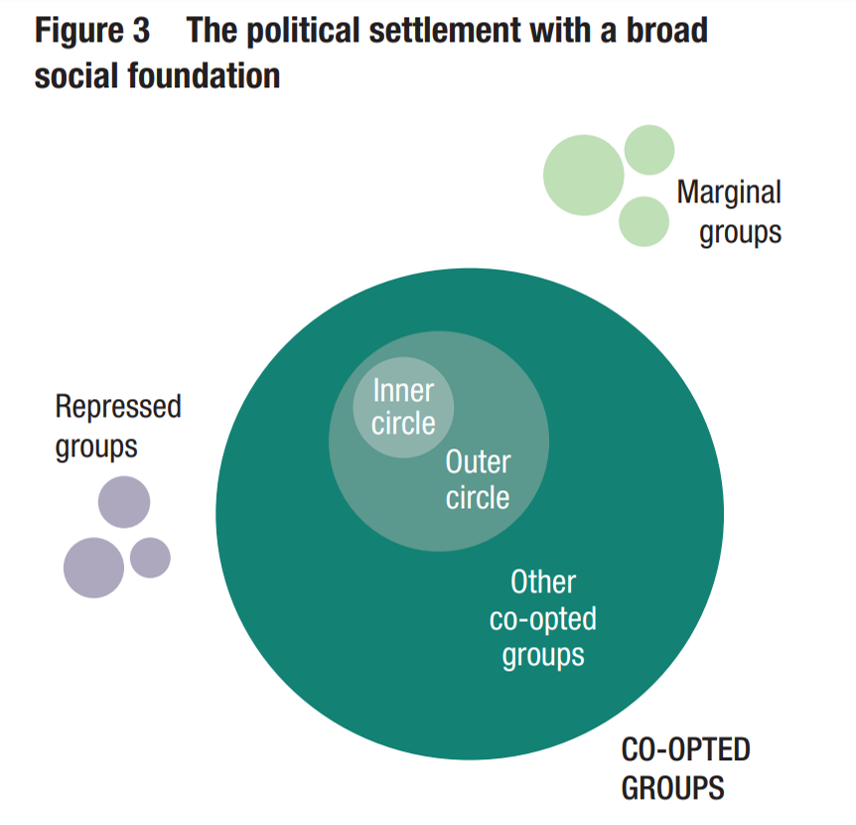 The configuration of power describes how power is arranged and organised within a state.

If the top political leader and his/her closest allies are strong relative to their own followers and opponents, we say power is concentrated. If, by contrast, they are relatively weak, we say power is dispersed. In concentrated configurations, the top leadership can dictate terms to other groups in the polity; decision-making can be quicker and implementation more predictable (which doesn’t necessarily mean that the outcomes will be better). In dispersed configurations, the top leadership cannot dictate terms: decision-making is more likely to be characterised by bargaining, horse-trading and struggle, with implementation less straightforward also.

Political settlements are not the same as political regimes

Dispersed power configurations are often democracies and concentrated configurations autocracies, but this is not always so, and it’s crucial to remember that. The question is not whether the regime is an autocracy or a democracy, military or civilian, but instead whether there are broad social groups in society the top leadership must be responsive to, whether it can make decisions that are binding on the rest of society and, if so, how.

What different political settlements are there?

Taken together these dimensions create a 2×2 matrix, with four different ‘types’ of political settlement: ‘broad-dispersed’, ‘broad-concentrated’, ‘narrow-dispersed’ and ‘narrow-concentrated’. The typology complements previous typologies that focused mainly on the question of state capability, supplementing them with insights into elite commitment.

The matrix below details four types of political settlement. It provides a shorthand and common language for researchers working in this space, and can be used by donors or reformers to inform where to focus their energy and resources in different country contexts. Armed with insights into elite commitment and state capacity, development practitioners and policy reformers should be better placed to make good decisions about what to attempt developmentally, and which partners to work with.

In the past, development practitioners have tried to impose ‘one-size-fits-all’ or ‘best practice’ policies on developing countries, often with disappointing results. To offset that tendency, the typology proposed in Figure 1 provides a first step to understanding the local context and informing a development strategy that best suits it.