Home The politics of responding to Covid-19 in developing countries: PART 2

The politics of responding to Covid-19 in developing countries: PART 2

Continuing from Part 1 of this blog, in Part 2, ESID’s senior team discuss what political settlement type is likely to mean for Covid-19 response.

In responding to Covid-19, we would generally expect countries with broad, concentrated political settlements, for example Rwanda, to have more capable health systems and be better prepared than others. Such countries ought, other things being equal, to stand a better chance of containing the virus and preventing community transmission, particularly if the broad social basis of the settlement has increased the perceived legitimacy of the state to act. However, once community transmission has started, their health systems will nevertheless be extremely stretched. They are also more likely than other countries to want and to be able to mitigate the worst effects of the pandemic by means of enforced social distancing (sometimes by the police or military) and various livelihood support measures. However, if transmission and mortality rates are anything like those in more advanced countries, the economic and social toll is still likely to be very large, and possibly a threat to the existing political settlement itself.
In broad dispersed settlements like Kenya, by contrast, there may be a largish health sector, but it is likely to be systemically weak. High-level state managers are likely to have less power to direct and motivate either health workers or the general public. We would expect to see significant coordination failures, plus instances of professional and social dissent, as has already emerged in Kenya and Malawi. That does not mean, however, that the response will be uniformly ineffective. Some ministerial departments, local authorities or individual hospitals may perform admirably in the context, as our work on ‘pockets of effectiveness’ and local-level coalitions in the health sector referenced in yesterday’s blog suggests. This is especially so if, historically, coalitions have been dedicated to building a pocket of effectiveness around pandemic response, for example Ebola. The non-state health sector may also be a significant resource, compensating for some of the gaps in state provision.

Narrow concentrated settlements, for example Cambodia, provide another twist. They are likely to be endowed with significant coercive potential, but a smaller, more elitist health sector, and less of a sense of responsibility for the mass of the population. Acting according to type, we would expect these countries to be focused on maintaining a minimal level of services to the elite, while largely ignoring or repressing the broader population. Dominant settlements with a narrow social base may lack legitimacy amongst citizens, who in turn may be less likely to obey public health directives. Interestingly, however, the vast scale of social and economic impacts of the pandemic might, by significantly raising the level of popular threat to the elite, incline some of them to take a broader perspective.
Finally, narrow dispersed settlements, such as Guinea, are likely to have the lowest capability and commitment to responding effectively to the pandemic. Unless a prior pocket of effectiveness has been built, we can expect, more or less, ‘do nothing’ or ‘after the horse has bolted’ responses. Consequently, we would expect the virus to peak relatively quickly and sharply, with a very high death toll, but possibly less social and economic disruption, than in other countries. In effect, this would be the selection of a full-blooded herd immunity strategy without any strategic analysis. At the same time, the inherent political fragility of these settlements means that the chances of serious political fallout will be high.
A sensible rule of thumb for development partners/international pandemic responders would seem to be: play to a political settlement’s main strengths; mitigate its most serious weaknesses.
In broad, concentrated settlements, that means recognising that the state is likely already to have a comparatively capable health and social protection system that can be financially supported – so it can operate on a larger scale – and technically supported – so it can use scientific knowledge and health data to more effectively guide policy choices. However, the concentrated nature of state power might constrain the leadership’s responsiveness to scientific evidence (especially in ‘big man’ contexts) or popular feedback.
In broad, dispersed settlements, by contrast, it might imply a more collaborative strategy, seeking to integrate the (more limited) capabilities of the state with the potential of actors outside it, for example NGOs, development partners, the private sector, and civil society.
In narrow, concentrated settlements, it may involve support for governments very rapidly innovating and rolling out social protection modalities, such as cash transfers, to formerly excluded populations. Diplomatic influence by development partners could try to reduce state repression (such as doctors’ associations not being allowed to report on what is happening on the ground).
In narrow dispersed settlements, strengthening the humanitarian response, and substituting for the state, may be the best the international community can do.

The mapping below shows preliminary results from ESID’s 42-country survey under its Defining and Measuring Political Settlements project. Axes represent the survey means. Codings are correct as of 2018. Please note that some countries, e.g. Sudan, DRC, have undergone significant change since then. 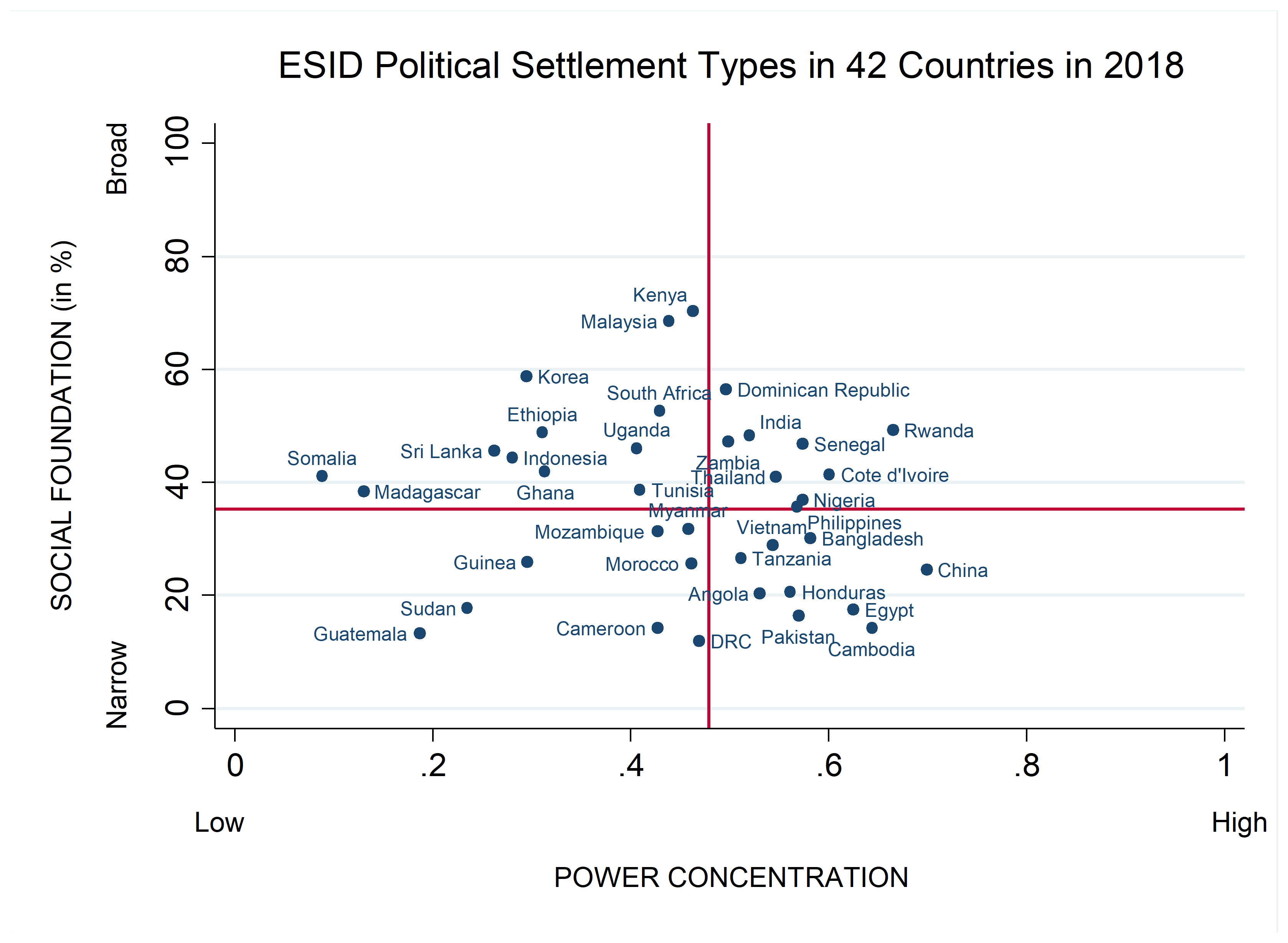 Across all types of concentrated settlements, there are risks that the response will be securitised/militarised and involve efforts to close political space; understanding the incentives that different political settlements present for rulers to operate in this way can help inform efforts to counter-balance such moves (e.g. by identifying and supporting countervailing forms of social power).
It is important to realise, of course, that many other contextual factors, such as leadership idiosyncracies, international connectivity, population density, health and economic profile, size of urban/rural informal economy populations, nature of diaspora and possibly climate, will influence the course of the pandemic and the state response.
Further, the power of ideas could play a major role in guiding responses. Some political regimes are more inclined than others to want to mimic so-called international ‘best-practice’; some are more committed to state-based solutions; some feel more of a responsibility towards women or towards lower-income groups. Development partners will need to think carefully about how they present and/or name different scientific ideas and narratives, including within contexts where scientific evidence is doing battle with religious ideas around protection. Finally, the peculiar combination of virulence and insidiousness of Covid-19 may prove to be a levelling factor among developing countries, with all of them overwhelmed to largely similar degrees, and consciously or unconsciously, adopting a herd immunity strategy. This in turn may trigger (and/or create opportunities for) highly dynamic processes of settlement change.
For these reasons and others, it is important that policy makers not be mesmerised by a static understanding of political settlement type. Currently, there is some evidence that Rwanda (broad concentrated), Cambodia (narrow concentrated) and Kenya (broad dispersed) are conforming to type, while Guinea (narrow, dispersed) actually appears to have reacted rather swiftly and vigorously, building on its experience of Ebola and working in tandem with international actors. However, as a first step in planning how best to assist a pandemic response, an appropriately cautious political settlements analysis can help development partners and civil society groups at least get their bearings.
Find out more about ESID’s  on project on defining and measuring political settlements and look out for the forthcoming book on this research.
Learn More