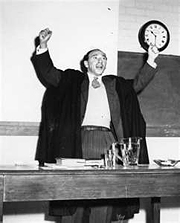 Serendipity is an often-neglected feature of academic life. Having moved to Manchester in order to join ESID in 2013, I could not have predicted that one of the very authors who had influenced my graduate musings on state building and civil-military relations would be the subject of a memorial conference at the University of Manchester. Samuel Finer had a personal impact on Manchester’s Department of Politics, revitalising it during his tenure as chair in the 1960s. Beyond his impact on students of politics in Britain over the course of several decades, here in Manchester Finer left behind a legacy which endures to this day in the work of his former students.
To me, however, Samuel Finer (I cannot get myself to call him Sammy, like those who knew him do) could only ever be a detached influence, an imagined relationship – much like the ones I have with Max Weber, Carl Sagan or even Freddie Mercury. And despite this lack of a tangible, personal connection, I am glad that we are meeting to celebrate Finer’s work, a scholar whose style and ambition is still unmatched in current research on the state and the public sector.

A giant among giants

Samuel Finer wrote few books, but all of them are exemplar reading for those of us in the business of making political science useful and compelling. In Comparative Government (1970) and The Man on Horseback (1962), he made the intricacies of political regimes and civil-military relations accessible to the layperson. And this is how The Economist opened its review of Finer’s posthumous magna opera, The History of Government (1997):

If there were a Nobel prize for political science, Sammy Finer would deserve to win one for this extraordinary trilogy – a work of scholarship so broad in its sympathies, so ambitious in its scope and so elegantly crafted that it leaves the reader gasping, literally, with astonishment and delight. To read it is like seeing the pyramids or the Taj Mahal for the first time.

My first exposure to Finer’s name was in a 1975 book edited by Charles Tilly, The Formation of National States in Western Europe. The result of a series of workshops sponsored by the American Social Science Research Council, the volume was responsible for revitalising an academic agenda – the political study of the state – which had been scornfully tossed aside by the so-called behaviourist revolution of the 1960s.
Despite the central role of the state in the very foundation of political economy and sociology, the new political science of the mid-20th century only had eyes for rational individuals and generic social systems. The state was seen as a mere instrument – or even worse, an expression – of societal preferences, a mere afterthought in the prevailing theories of democracy and the free market. Against this tide, Finer and his co-authors – some of whom were, like him, based in Europe – kept the analysis of state organisations alive and thriving. Together with contemporaries like Samuel Huntington and Aristide Zolberg they built a scholarly agenda of political development and state building which would influence some familiar names of the next few decades, like Theda Skocpol, Peter Evans or Francis Fukuyama.

A different form of political science

In contrast with behaviourism and its neo-marxist counterpart, Samuel Finer pursued in his work a less grand – but no less consequential – form of political analysis, firmly rooted in historical detail but driven by a comparative zeal. Instead of sweeping generalisations, Finer was interested in the recurrent themes of human history – the defining features of such inescapable fixtures of our lives as government or the military.
In a way, this form of social science goes back to Max Weber himself, whose chief analytical contribution was arguably the notion of ideal type, an intellectual construct capturing the essence of social phenomena. An ideal type does not exist in the empirical world – in fact it cannot – but it serves as a lens for looking out into the world and interrogating the vagaries of history.
In his sprawling The History of Government, Finer pursued exactly that kind of logic for categorising political regimes and states across time, beginning with the four ideal types of Palace, Nobility, Forum and Temple. Proceeding in almost architectural fashion, like Weber before him, Finer was able to derive virtually every conceivable form of government from that deceptively simple typology. And, crucially, that was the end of his theorising: all he wanted was an analytical lens to project into the intricate tapestry of history, without any need for teleology or prediction.
Finer’s political science was not as ambitious or methodologically rigorous as the sort that is in vogue these days, and he would surely never get published in journals like the American Political Science Review were he starting his career now. But his analysis does achieve an enviable level of parsimony, providing clarity without artificial constraints and caveats. Moreover, I would say that Finer represents a more humanist form of political science. He was concerned with the minutiae of government, the little innovations that later cascade throughout the centuries, as well as the real people who fought for them. In an academic discipline where all too often real people tend to vanish behind the trappings of institutions, incentive structures, and social norms, it is refreshing to read a political analysis that is so unabashedly human.

Bringing wit back in

There is something profoundly appealing about reading Finer, whose prose trades the jargon and pseudo-scientism of political science for the dry wit and evocative language of a true educator. Apparently he could not resist the temptation of spicing up his analysis with the kind of quips that belong more in the society pages of a newspaper than in academic literature. Take this excerpt from his chapter on the military and state-making in the 1975 volume, which caps a paragraph dispelling the frequent identification of the military with a purely coercive role:

Only minds like those of Marx and Engels, obsessively concerned with conflict, could so continuously harp upon the role of armed forces as the sole force creating and maintaining the state.

And here is his account of the pathologies of past experiences with democracy at the beginning of The History of Government:

For rhetoric read demagogy, for persuasion read corruption, pressure, intimidation, and falsification of the vote. For meetings and assemblies, read tumult and riot. For mature deliberation through a set of revising institutions, read instead self-division, inconstancy, slowness, and legislative and administrative stratification. And for elections read factional plots and intrigues. These features were the ones characteristically associated with the Forum polity in Europe down to very recent times. They were what gave the term ‘Republic’ a bad name, but made ‘Democracy’ an object of sheer horror.

It saddens me to think that as a discipline we have got to the point where we continue to make exactly the same kind of analytical interpretations as Finer, but without allowing the tiniest sliver of personality to shine through. I look forward to the day when I will read a turn of phrase like “object of sheer horror” in the pages of World Development or Comparative Politics.

From celebration to inspiration

Besides commemorating the centennial of Samuel Finer’s birth, I wish that we could use the 1st Development of Government conference at The University of Manchester to reflect on where we stand and who we are as an academic discipline: to ask, in particular, whether our voices can marry the analytical demands of today’s social science with the ingenuity and provocation of Finer and his contemporaries.
Thomas Kuhn thought that fixation with elders was surely the sign of an immature scientific community, one which has not yet advanced enough to move beyond the words of its founders. Indeed, Finer’s works are clearly superseded by the more rigorous and disciplined contributions of recent decades. At the same time, however, we could forgo the detachment and coldness that masks our own insecurity as analysts; our political science could be just a tiny bit more human. And in order to achieve that, there are few inspirations as powerful as Samuel Finer.