The Transforming Settlements for the Urban Poor (TSUPU) Programme sought to align national, municipal and community urban development efforts, and include the poor in planning and decision-making processes. This has helped to bring about improved relationships and attitude change between Ugandan municipal officials and the organised urban poor, creating a more enabling environment for poverty reduction. Mobilisation of the urban poor into organised federations such as municipal development forums has also made governance more inclusive. The investigated projects that have contributed most to poverty reduction are the co-produced water and sanitation projects. It is this relationship and co-production between the local government and organised urban poor that is key to reducing urban poverty in Uganda. 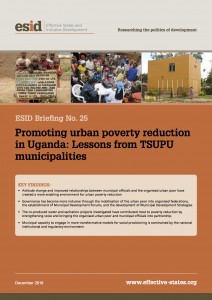