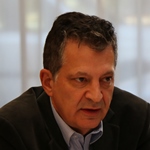 Alan Hirsch is a Professor and Director of the Graduate School of Development Policy and Practice at the University of Cape Town.

Bhorat, H., Hirsch, A., Kanbur, R. and Ncube, M. (eds.) (2014). The Oxford Companion to the Economics of South Africa. Oxford University Press.
Hirsch, A. (2014). ‘Aspirations to an elusive developmental state: The obstacles to deep reform’ in Busani Ngcaweni, B. (ed). The Future We Chose: Emerging Perspectives on the Centenary of the ANC. African Institute of South Africa.
Bhorat, H. and Hirsch, A. (2013). ‘The political economy of monetary policy in South Africa: real economy outcomes‘, in K. Dervis and H. Kharas (eds.), The G-20 and Central Banks, Brookings Institution.
Hirsch, A. (2005). Season of Hope: Economic Reform in South Africa under Mandela and Mbeki. UKZN Press and IDRC.

Alan is also the Country Director for Zambia at the International Growth Centre at the London School of Economics.