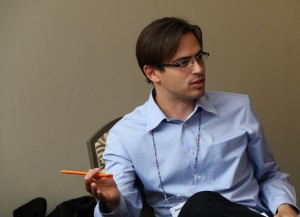 Economist Jonathan Said has been working in Malawi for three years.

Malawi goes to the polls on 20 May. We spoke to ESID researcher and economist Jonathan Said to get a sense of the issues ahead of the election. Said has been working in Malawi as an economist for three years.
Malawi has recently been rocked by what’s termed “cashgate” – the biggest financial scandal in the country’s history. At the centre of the “cashgate” scandal is a computer-based financial information storage system and some government officials who have allegedly been exploiting a loophole in the system to divert millions from government coffers.

While “cashgate” dominated media headlines and political debate last year and earlier this year, the public are now seeing the reality of its impact as the next budget is prepared, with significant cuts in education and other programmes as a result of the financial losses.
Although this scandal has affected what the public think of the government’s ability to handle finances, Said believes it hasn’t really forced the political parties to address the country’s long-term economic needs: “There has not been enough talk about economic issues in the lead up to elections. There has been talk about agriculture and rural transformation and the Farmer Input Subsidy Programmes implemented in 2006, but there has not been the depth needed to address sustained economic growth, or issues of poverty,” he said.
Said has recently finished work on reviewing Malawi’s industrial policy, assessing why Malawi is not undergoing the industrial transformation needed to lift itself out of poverty. Said’s work reveals that this comes down to two key factors:
“First of all there are the political issues. Malawi needs political reform. There is not much incentive for politicians to focus on economic growth or state capacity. Secondly, there are economic causes. For example, key sectors don’t have spillovers. Tobacco is a major sector, but it doesn’t have a spillover. If you grow tobacco, you can only make cigarettes. Markets need to diversify and the tax base needs to widen.”
Said also cited Malawi’s rapid population growth – which isn’t being matched with the country’s skills and learning needs – and access to energy and finances – which aren’t being addressed – as other factors inhibiting the country’s growth. These issues have been difficult for governments to address due to limited state capacity. Leaders aren’t focussing on long-term planning because they are preoccupied with short-term re-election or succession campaigns. It’s an example of the challenging combination of balancing the right political models and settlement with good governance and long-term economic thinking that the ESID project hopes to address.
elections, growth, Malawi, political settlements