Indrajit Roy reports from the Annual Conference on South Asia 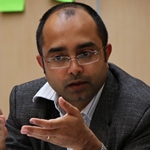 30 November 2015
By Indrajit Roy
Each autumn since November 1971, droves of South Asianists have flocked to Madison, capital of the US state of Wisconsin, for the Annual Conference on South Asia.
Globally, this three-day event is perhaps the most important on the South Asianist calendar. Having attended the conference myself it’s easy to understand why. Held between 21 and 25 October,  this year’s location was downtown Madison, a stone’s throw from the state’s capitol building and adjacent to State Street, which my taxi driver described as the most happening part of town.
Over 750 people attended the pre-conferences, which covered a number of themes relating to historical and contemporary South Asia. These ranged from Sanskrit in Persianate India to The Indian State and from Darjeeling Histories, Politics, and Environments to Feminism.
The preconference on The State in India, convened by Uday Chandra of Georgetown University, brought together scholars of political science, anthropology and international development to rethink the nature of the state in contemporary India and its relationship to democracy, law, nature and social diversity. By examining the myriad scales and sites at which power operated, the participants contributed to ongoing debates on the meanings of the state in contemporary India.
The session was kicked off with a critical discussion of Kanchan Chandra’s book manuscript, ‘Democracy and Dysfunction’, and a debate on the extent of India’s much-vaunted electoral participation, the ways in which democracy intertwines with clientelism and rights-discourses and the moral economy that underpins the clientelism that characterises Indian democracy.
The panel on Development, Economic Liberalisation and the Postcolonial State in India involved debates on the quality of provisioning of basic services by the state , the multifaceted presence of the state in the country’s forest regions and the implications of state-rescaling through devolution of funds, functionaries and functions to Panchayats.
The final panel, on Thinking through the Modern State in India across Time and State, debated the myriad changes in the state over the previous five decades spawned by democratisation and liberalisation, and the implications of these changes on the ways in which the state in India is and ought to be studied. The panel discussions benefited from excellent interventions from the floor by Aseema Sinha, Sanjay Ruparelia and Rahul Mukherjee.
If the pre-conferences were cerebrally stimulating, the conference panels were a veritable intellectual treat. Ashutosh Varshney led a debate on the colonial and pre-colonial origins of Indian political development in one panel, whilst Vinayak Chaturvedi’s panel contemplated the future of the rural world in another.
Our own panel, on Rethinking the Political Anthropology of Contemporary India, raised issues around popular negotiations with the Indian state in the context of its employment guarantee provisions , land reforms, women’s savings and credit associations and counter-insurgency operations.

The panellists revisiting the Bollywood classic, Amar Akbar Anthony, dressed up as the three main protagonists of the movie. They entertained their audience while also providing scholarly insights into the relationships between the film’s male protagonists, their mothers and the Indian nation.
Finally, the keynote address by Wendy Doniger , on ‘The Kautilyan Kamasutra: Sex and Politics in Ancient India’, presented the themes of political economy and erotic literary tradition as a seamless weave to a spellbound audience.
Conference delegates found time not only to attend the panels of their interest and to tour around the town’s four lakes but also to network and forge collaborative relations with like-minded colleagues. New friendships were made. Old ones were renewed.
As I settled down to catch up on my forty winks aboard my Heathrow-bound flight, I could not help expressing my satisfaction to myself. This is one of the most enriching conferences I have attended. The bar has now been set very high.