17 October 2018
ESID together with the Global Development Institute is delighted to be welcoming Dr Yuen Yuen Ang, Associate Professor of Political Science at the University of Michigan, to deliver this year’s Annual Adrian Leftwich Memorial Lecture. To register for free tickets go to https://esidlecture.eventbrite.co.uk
For decades, observers have assumed that as China’s economy prospers, it will eventually democratise. Today, however, the West is alarmed that not only does China appears more authoritarian than before, but the new leadership is perceived to harbour ambitions to compete with Western powers for world dominance. This turn of events has triggered fear around the world—today, the so-called “China model” is seen as a fundamental threat to liberal-democratic values. 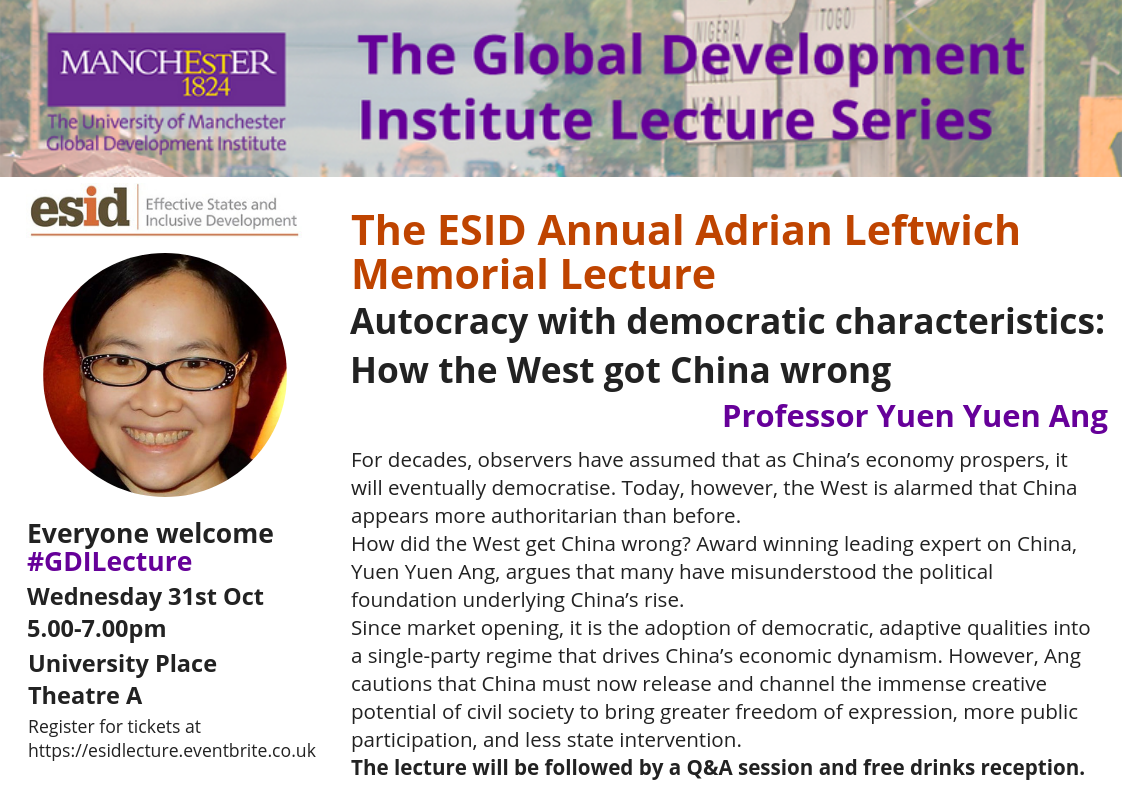 How did the West get China wrong? Award winning expert on China, Yuen Yuen Ang argues that many observers have misunderstood the political foundation underlying China’s rise. Professor Ang’s research reveals that since market opening, China has in fact pursued significant political reforms, just not in the manner that Western observers expected. Instead of instituting multiparty elections, the reformist leadership realised some of the key benefits of democratisation through bureaucratic reforms, thereby creating a unique political hybrid: autocracy with democratic characteristics. In other words, it is not autocracy, but rather the injection of democratic, adaptive qualities into a single-party regime that drives China’s economic dynamism. But bureaucratic reforms cannot substitute for political reforms forever. Ang cautions that China must now release and channel the immense creative potential of civil society to bring greater freedom of expression, more public participation, and less state intervention.
This lecture will draw on Professor Ang’s recent essays in Foreign Affairs, available here: https://www.foreignaffairs.com/articles/asia/2018-04-16/autocracy-chinese-characteristics and https://www.foreignaffairs.com/articles/asia/2018-06-29/real-china-model
Yuen Yuen Ang is Associate Professor of Political Science at the University of Michigan, Ann Arbor. Her research applies insights from “complex adaptive systems” (or complexity for short) to the study of economic and political development, centring on how simultaneously poor and weak states can escape poverty, and the strategies and institutional designs that enable adaptive problem-solving in places beyond wealthy democracies. In 2018, she is named an Andrew Carnegie Fellow by the Carnegie Corporation of New York, for “high-caliber scholarship that applies fresh perspectives to some of the most pressing issues of our times”. Her first book, How China Escaped the Poverty Trap (Cornell University Press, Series in Political Economy, 2016), won the 2017 Peter Katzenstein Award for “best book in political economy”, the 2018 Viviana Zelizer Best Book in Economic Sociology, awarded by the American Sociological Association, and was named “Best of Books 2017” by Foreign Affairs.