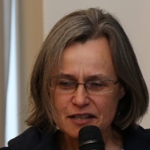 Diana Mitlin is Professor of Global Urbanism and Managing Director at the Global Development Institute at The University of Manchester. She is also CEO of the African Cities Research Consortium. Diana coordinates ESID’s capacity-strengthening activities and is leading the urban poverty project in India.

Diana’s main research issues are urban inequality and poverty, state and civil society shelter policies, particularly related to the upgrading of information settlements, grassroots organisations and community development, and civil society. Her ESID project addresses state interventions to reduce urban poverty in India and the influence of civil society on such interventions.

At present Diana is a trustee for the Urban Poor Fund (Netherlands). She continues to work closely with two networks of Southern citizen networks and NGOs, Shack/Slum Dwellers International (SDI) and the Asian Coalition for Housing Rights.

India, urban poverty
We use cookies to ensure that we give you the best experience on our website. RejectOk