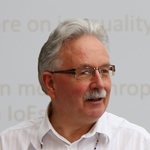 David Hulme is CEO at ESID. He is also Professor of Development Studies and Executive Director of the Global Development Institute at The University of Manchester. From 2000 to 2010 he was Director at the Chronic Poverty Research Centre.

David’s personal research focus within ESID is on political economic analysis (PEA). Governance has become a fixture of mainstream development policy, but it is not yet clear whether the new set of ideas implied by governance and PEA is actually transforming aid practices and relationships on the ground.
David is currently working with Pablo Yanguas on a comparative study of PEA use by the World Bank and the UK Department for International Development (DFID) in Ghana, Uganda and Bangladesh. He also published a working paper with Laura Routley reviewing the literature on the emerging phenomenon of PEA approaches within development agencies and examining its impact on the effectiveness of their programmes.

Among other appointments, David is  an academician of the Academy of Social Sciences, a board member of the United Nations Research Institute for Social Development, and vice-chair of the Economic Social Research Council/DFID Poverty Alleviation Research Grants Committee.
David supervises PhD students with interests in results-based and adaptive development cooperation; and the politics of planning and construction of dams in Tanzania, Ethiopia and Uganda.