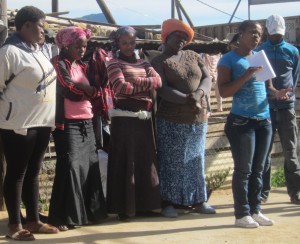 Langrug residents explain how they achieved change for their community

One of the best ways to understand the complex power structures that stand in the way of people moving out of poverty is to walk streets where people live and talk to them about their living conditions. So the ESID Cape Town conference attendees were fortunate to be given this opportunity on a visit to Langrug Township with Slum Dwellers International.
The visit was organised by Professor Diana Mitlin of the University of Manchester. The Community Organisation Resource Centre also facilitated a visit from representatives from an informal settlement in Durban to see what learning could be shared with those in Langrug.

Langrug is nestled in the foothills of the incredibly wealthy Franschoek wine region outside Cape Town. You could walk from a premium real estate agent or upmarket delicatessen to the dusty lanes of the informal settlement within 20 minutes. The settlement is home to almost 1,800 families and was established on the slopes of a mountain during the 1990s, when low income earners and migrants came to work on the vineyards. The land is owned by the government.
While the people of Langrug live in poverty, they are not by all definitions poor. They are organised and have been actively using their voice to make demands of the municipality and to arrange for basic provisions, which have recently included basic sanitation services, such as taps, toilets, laundry basins, and an upgrading programme. They have organised into a committee to liaise with university students, who have helped to develop improvements such as wash facilities containing a vertical garden and grey water drainage. Such projects combine technical support from students and practitioners, but also provide paid employment from those delivering the work, who must be inhabitants of the settlement.
The representatives we met are also a proud and articulate group, able to express what their community needs and wants. They had negotiated with a local landowner who kept a small reservoir and was concerned about rubbish and grey water accessing the land. As a result, run-off drains have been provided along the side of the settlement.
These positive results were not lost on the visitors from the Durban informal settlers, who were impressed with the partnerships the Langrug settlement had achieved with NGOs, universities, technicians and, most importantly, powerful elites, such as landowners, local government and the municipality. The new wash room and vertical gardens at Langrug

In Durban, this engagement with the municipality is lacking and, as a result, the organised representatives from the informal settlements cannot negotiate appropriate basic facilities. Earlier this year, 22,000 inhabitants from informal settlements marched on the Durban municipality to demand engagement with them.
Community leader, Sifiso Nobani, said of the march: “We chose to march because this is the only language that the municipality understands. Roads will be closed and people and businesses will take notice of us.”
The visit was more than the opportunity to see the need to end poverty, nor just a reflection of how small changes can make a big difference to living conditions. It was a powerful insight into what can be achieved when poor communities organise and find a voice and can successfully engage with those who hold power.