Home Closing the gap between form and function: a new approach to institutional reform in Uganda

Closing the gap between form and function: a new approach to institutional reform in Uganda

Uganda is a public sector reform leader in Africa. Over the last three decades the country has introduced many laws, processes and structures that are ‘best in class’ in Africa (and beyond). However, many of the reforms have produced new institutional forms that function poorly and yield limited impacts.
Research by ESID with its partners at Harvard University and in Uganda suggests the next step is to re-frame the reform agenda to address challenges concerning policy implementation, and to close the gaps between what Uganda’s system looks like and how it functions.
Key findings: 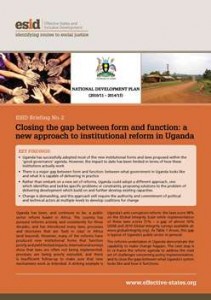