Home David Hulme looks ahead to the DSA conference in September

David Hulme looks ahead to the DSA conference in September 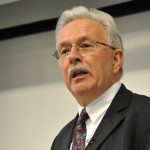 
I am just back from Japan – a delightful visit with colleagues in Nagoya and Tokyo. The only cloud, in a very sunny week, was hearing about the scale of public support for a populist, nationalist right-wing party in Japan. Does this sound all too familiar…the UK, France, the Netherlands, Austria…and over to Donald Trump in the US? Our theme at the DSA Annual Conference is ‘Politics in Development’. Much of the agenda is about the politics of developing and emerging countries, but we shall have to allocate time to asking about what is happening to ‘politics’ in the rich world – as it has very big implications for international development and increasingly these seem to be turning negative.
This year’s conference is all set to be a very productive three days. Its sessions look at the big issues and challenges of international development and, alongside these, at detailed work on theoretical, methodological and applied topics. Outside of the sessions there are great opportunities for informal discussions in Oxford’s many cloisters, cafes and bars.
But, what a difference a year makes! Last year at the DSA 2015 conference at Bath there was an air of cautious optimism about the global context for making the world a somewhat fairer place and tackling poverty and inequality. The Sustainable Development Goals were about to be unveiled in New York – very long and very long-winded, but reflecting deep discussions by all UN member states: a real step forward for global democratic deliberations. Arrangements for the Climate Change talks in Paris were making good progress according to the ‘sherpas’ setting up the negotiations. Europe was having problems with ‘migrants’, but Angela Merkel was encouraging EU governments to fully honour their UN commitments to supporting refugees and helping migrants.
In mid-2016 things look very different and an air of deep pessimism and/or profound precariousness is evident. For those of us who are UK citizens (and especially for people working in universities) the Brexit vote means that the future is very unclear. Isolationism, protectionism and xenophobia seem to be the values that are sweeping around the UK…and Europe…and further afield. For many involved in teaching and research on international development, the public popularity of such values, and associated policies, challenges many of the values that have underpinned the promotion of development – international cooperation, economic and social integration, welcoming people from other parts of the world, global social justice and human rights.
But, we need to rise to this challenge…and perhaps take some responsibility for it. Have we, as academics, teachers and researchers, focused our work on those who think like us and neglected our role as contributors to ‘public understanding’? Could we have done more…and can we do more in the future…to help our fellow citizens and people in other countries understand that in the 21st century we all live in one world? If we want an international environment that is stable, prosperous and sustainable for ourselves and for future generations then, as Angus Deaton writes, we (humanity) “are all in this together”.
There will be lots of opportunities to discuss our detailed work at the Conference and also to think about what DSA members and DSA as an organisation can do to help public understanding in the UK of the need for collaboration and cooperation between people and countries. Please do some thinking in advance and come prepared – what can we in DSA (as individuals and as an organisation) do to make Brexit less damaging for international development?
Could you also put a little thinking into ‘whom’ you would like to elect to DSA Council to represent your views? There will be several positions coming vacant this year and we need energetic and committed members to join the Council. Please send nominations to our Secretary, Fiona Nunan before the Conference.
Find out about our DSA panel on The Politics of Public Sector Transformations